Reimagining computing for a sustainable future

The cloud has revolutionised how we think about computing - from development practices (think continuous deployment with Infrastructure as Code) to how businesses rapidly experiment by restructuring their expenditure (as Opex instead of Capex). What is less understood is how large cloud providers are making computing more sustainable by:

In this article, we will explore how switching to the cloud is more energy-efficient, how large cloud providers are better equipped to be environmentally friendly and how the cloud can help our businesses be more sustainable.

In other words, how our workloads are greener when we run them on the cloud.

In 2015, the Paris Accords presented humanity with a challenge: limit global warming to "well below 2°C above pre-industrial levels". To achieve this target, carbon emissions need to be halved by 2030. This is an ambitious goal and the clock is ticking.

A grim problem, but as Bill Gates said: “It's our power to invent that makes me optimistic”. And indeed, over the last seven years, these accords have driven many organisations to respond with equally ambitious sustainability goals.

Software is eating the world, and compute workloads that power that software have been increasing year-on-year for decades now. So how have big cloud providers (AWS, Azure and GCP) been exploiting their economies of scale to ensure that their energy usage doesn't grow on the same scale?

Let’s take a moment to understand the jargon around sustainability -

The carbon neutral approach involves offsetting carbon emissions. A company that uses this approach produces net zero carbon emissions. For every x kilotons of carbon produced, an equivalent amount is absorbed by carbon sinks like soil, forests and ocean. The way companies achieve their net zero status is by buying the carbon offsets.

The carbon neutral approach has its critics - there are simply not enough carbon sinks in the world to absorb ever-increasing carbon emissions.

Data centres consume substantial energy - they use electricity to run their servers and a lot of power to keep them cool. This accounts for most of their consumption, so any efficiency gains here can disproportionately reduce energy usage.

Power Usage Effectiveness (PUE) is a measure of data centre energy usage efficiency. It is the ratio of total energy usage and the energy needed to run IT equipment.

As a data centre becomes more efficient, most of its energy is used towards powering servers and its PUE approaches 1. 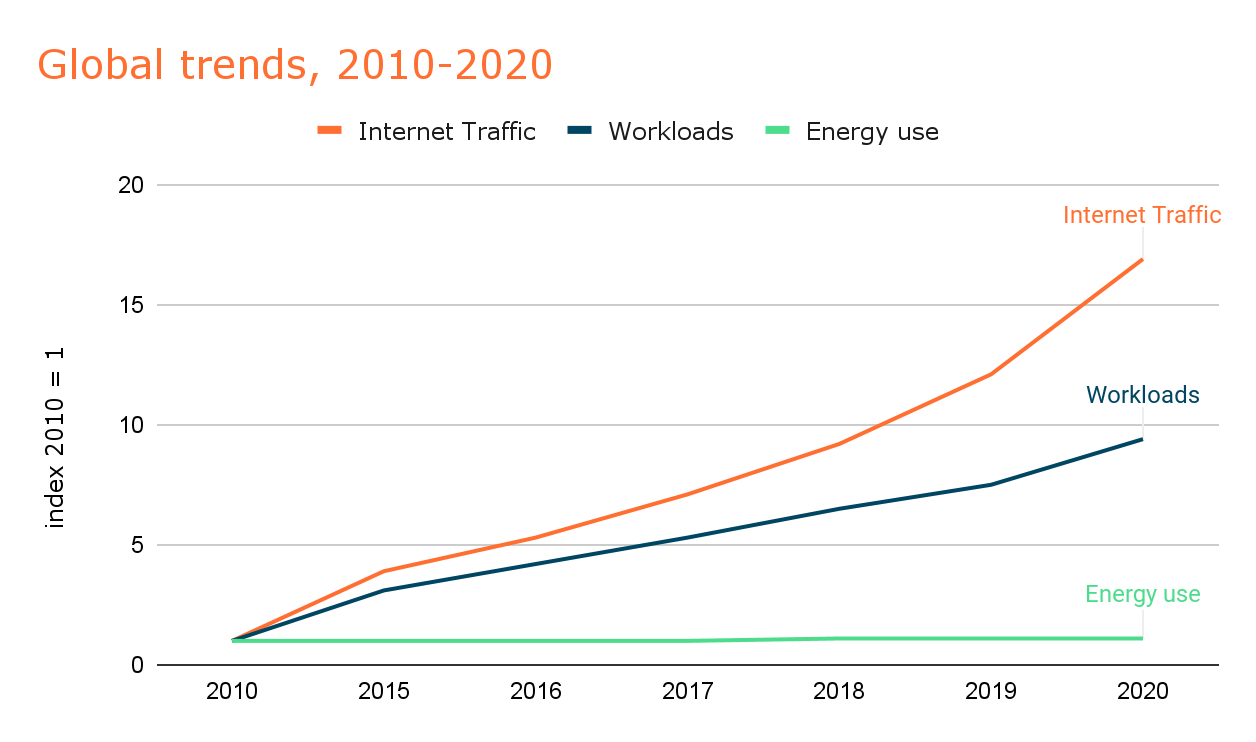 The chart above shows how, despite massive growth in internet traffic and compute workloads, data-centre energy usage has essentially plateaued. We will look at two key factors that explain how this has been achieved - optimising PUE and infrastructure efficiency.

The lower the PUE, the more efficient the data centre. The figure from 2020 below shows a global average PUE of 1.59. The big three cloud providers however do much better - their PUE between 1.06 and 1.2. 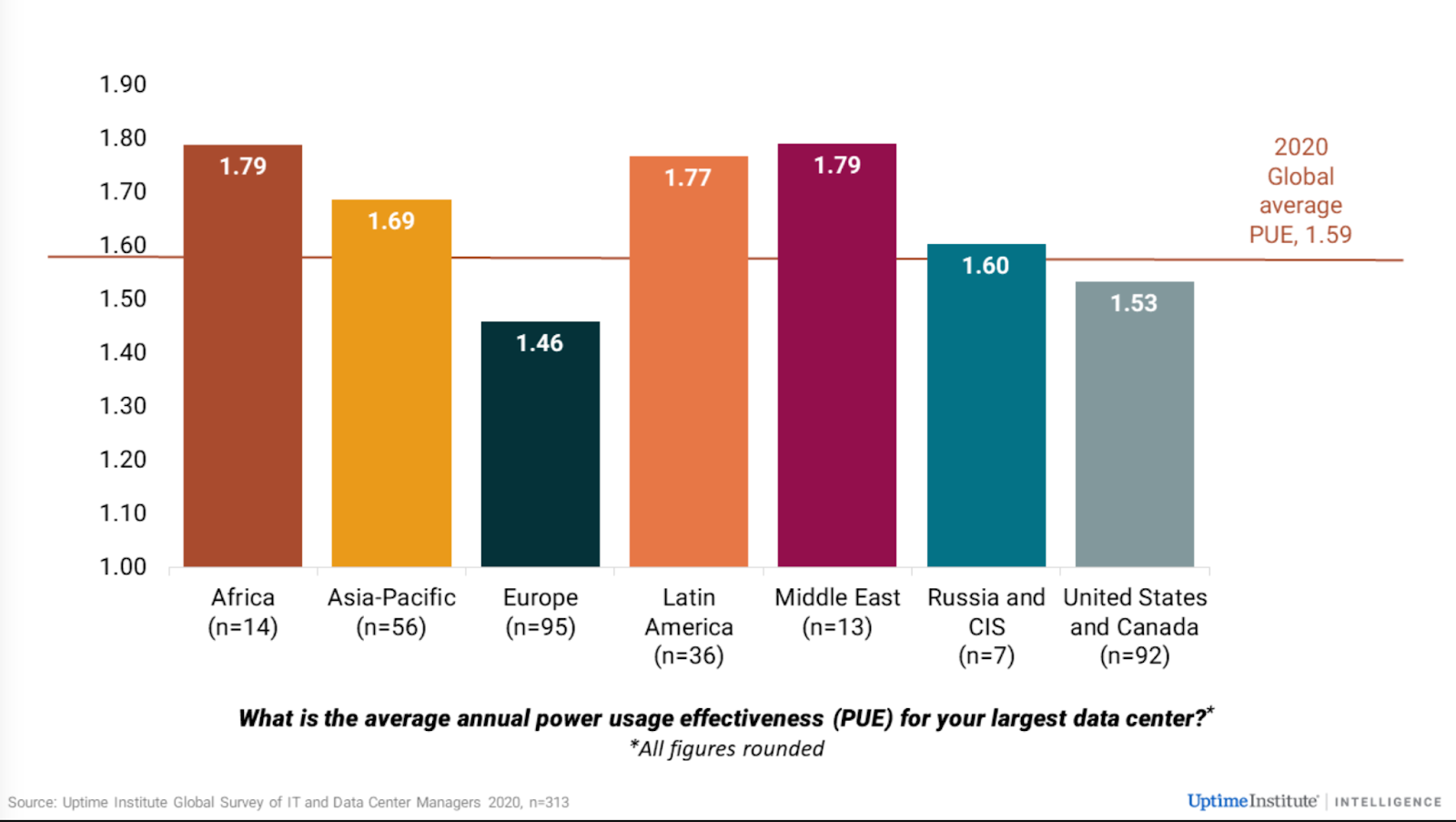 Cooling servers requires a lot of electricity. This is an area where cloud providers are innovating and have optimised their PUE much better than the rest of the industry.

Google employs advanced cooling techniques, using highly efficient evaporative cooling or outside air instead of mechanical chillers whenever possible. They have also successfully piloted machine learning models to predict optimal cooling settings and have demonstrated 40% reduction in their energy usage.

Azure employs similar techniques such as cooling through direct evaporation and moving away from conventional water-based systems such as water-cooled chillers.

Even for cloud providers though, not all data centres are created equal. Data centres in colder parts of the world, like Sweden and Finland operate in naturally cooler environments so require less energy for cooling.

Greater use of virtualisation and better capacity planning have allowed cloud providers to achieve higher resource utilisation, with corresponding higher energy efficiencies. On-premise data centres on the other hand, have to be overprovisioned to provide room to scale.

When companies move to the cloud, applications can gain 20-30% in energy efficiency - this is especially pronounced with the big cloud providers.

Google claims to deliver seven times as much computing power with the same amount of electricity.

Azure claims to be up to 93% more energy efficient than on-premises solutions.

Google has been carbon neutral since 2007. From 2017-2020, despite ever-growing compute workloads, Google has matched 100% of its global electricity use with purchases of renewable energy. By 2030, Google aims to run their business on 24/7 carbon-free energy in all of their data centre operations and office campuses. Their roadmap has been moving from offsetting emissions to reducing, and even eliminating emissions. As Sundar Pichai said: “We aim to shift away from a net-zero model of ‘emit and compensate’ and instead target ‘absolute zero,’ where we simply never emit carbon from our operations in the first place.”

Azure has been carbon neutral since 2012 and has committed to using 100% renewable energy by 2025 and to be carbon negative by 2030 - a commitment to remove more carbon each year than emitted by their data centres. As Satya Nadella tweeted: “Earth Day is a reminder that we must take action to protect our most finite resource - the planet. As a company, we’re committed to becoming carbon negative, water positive, and zero waste by 2030 and using technology to create a more sustainable future.”

AWS has committed to powering their data centres using 100% renewable energy by 2025. They have also added “Sustainability” as the 6th pillar of their “Well-Architected Framework”. Amazon’s climate pledge is to be net-zero across their business by 2040. 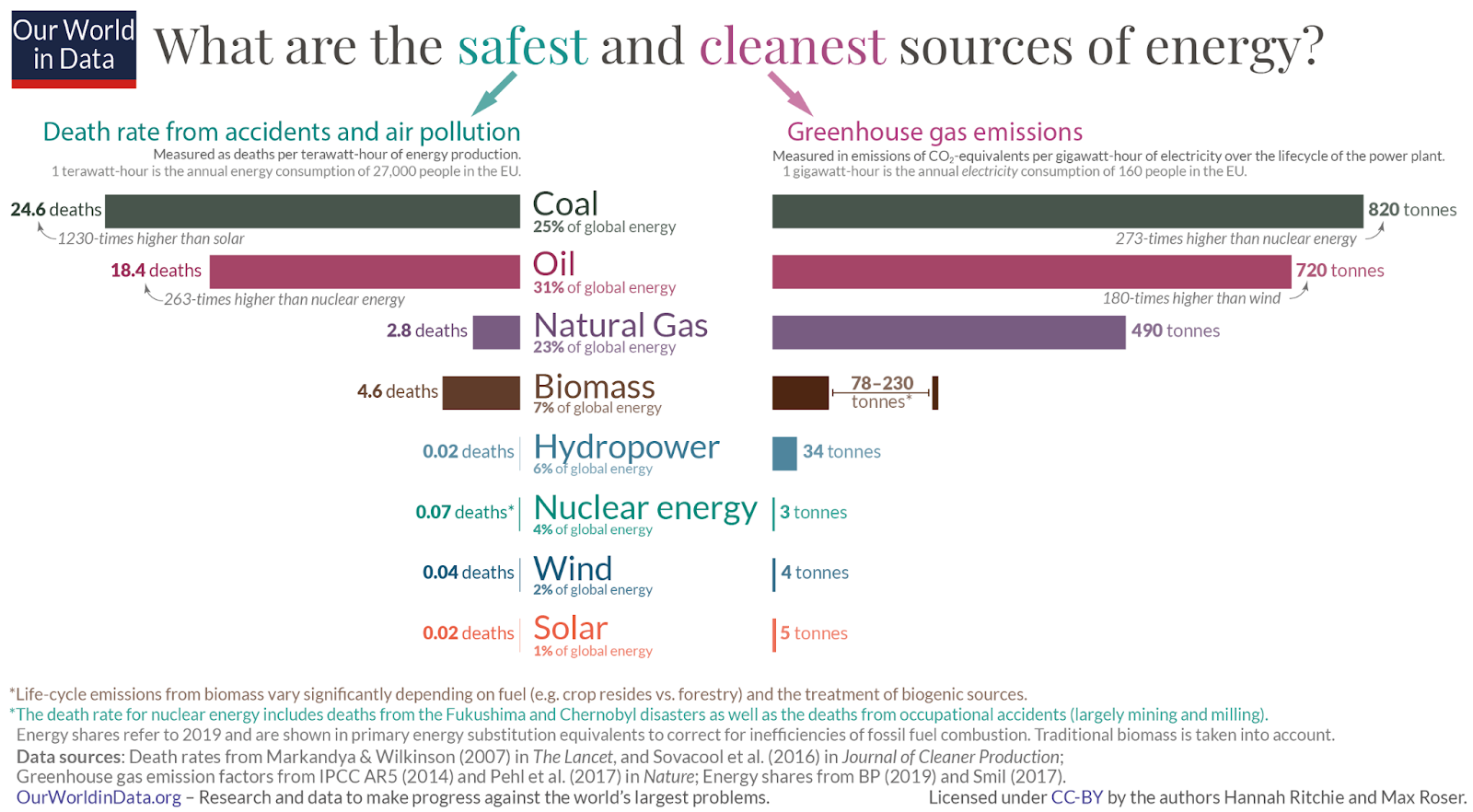 In a linear economy, natural resources are turned into products and eventually become waste. In contrast, a circular economy aims to keep products, materials and infrastructure in use for longer. The ideal of a circular economy is zero waste. 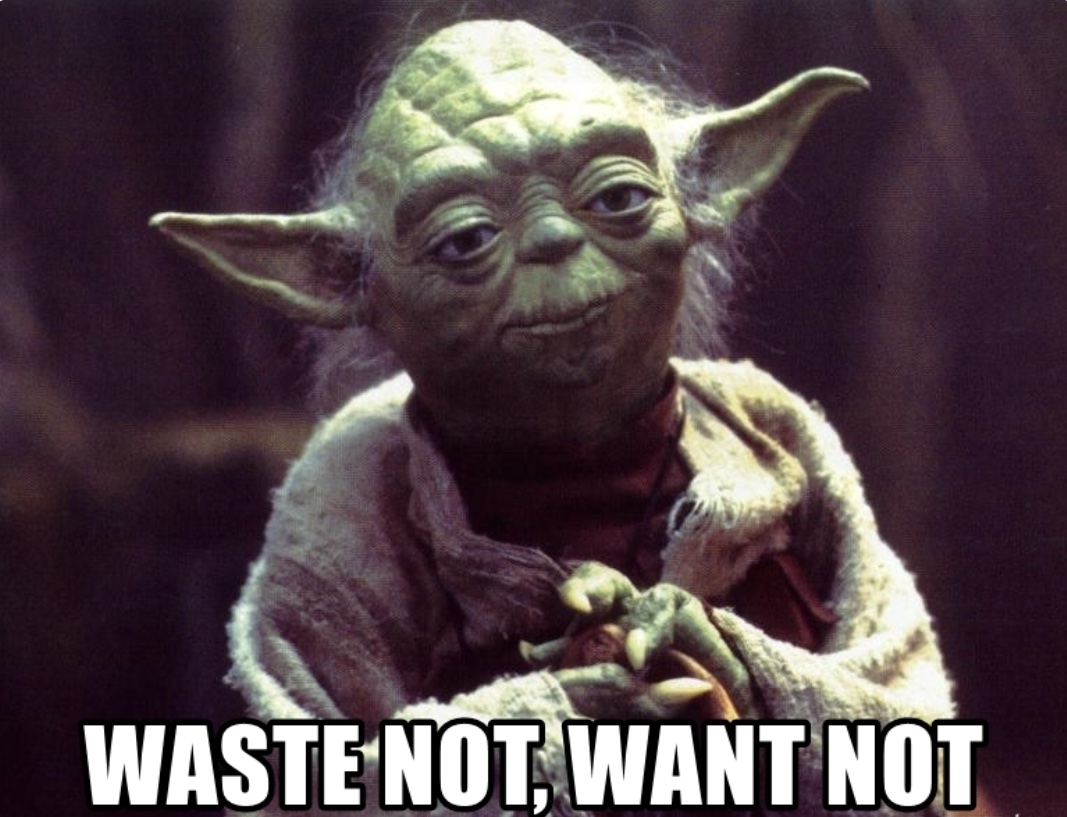 Amazon is increasing the useful life of its servers and networking equipment to lower operational costs, boost sustainability and become more efficient.

Google custom builds and remanufactures its own servers with refurbishing as a first-class goal. In 2019, their global landfill diversion rate for data centres was 90%.

We have looked at how the big cloud providers have committed to building a more sustainable future with a holistic approach towards reducing carbon emissions.

We hope to have convinced you that moving to the cloud is more sustainable than running your own data-centre. However, our responsibility does not end there. We can and we should do better and minimise our own environmental impact while on the cloud.

One of the phenomena we see when moving to the cloud is the overwhelming sense of abundance. While that is fantastic for experimentation, the downside is often a consumption model of wastefulness. Being more cost-conscious in the cloud will increase our sustainability benefits - the best carbon emissions are those that never happened.