How to build explainability in a machine learning project

Recently we wrote about the importance of  explainability in machine learning projects. In this post we delve deeper and explore how it can actually be done by data scientists, researchers, and others.

The use of algorithms to automate or delegate decision making processes is increasing and can be found in a diverse range of domains. Sometimes this is driven by a desire to cut costs; occasionally it comes from a belief that algorithms are more "objective" and "unbiased" when it comes to decision-making. This belief is false; algorithms are only as good and fair as the data used to train them and the cost functions they were taught to optimize.

As we increasingly delegate important tasks to machines, it’s important to remain sensitive to what algorithms can and cannot do. This is particularly crucial when they are used to make crucial decisions that could seriously affect the lives of many people. If we create a learning algorithm that tries to blindly copy historic data, it’s highly likely that algorithms will replicate the biases and unjust practices of the environment from which the data emerged.

What can we do practically to avoid these issues? How can a team of Data science or machine learning engineers, maybe with limited data and domain knowledge, make sure this is avoided?

There are multiple aspects to creating a fair model:

Although all three are important, the final point - explainability - is often overlooked. One of the reasons for this is that it is the most challenging as it places additional demands on people using algorithms. This article focuses on explainability; first it provides a brief recap before then exploring how we can incorporate explainability into a machine learning model.

Explainability is the extent to which humans can understand (and thus explain) the output of a model. This is in contrast to the concept of ‘black box’ models, where even the designers do not understand the inner workings of a trained model, and thus cannot explain the results produced by it.

For transparent models, it is possible to directly understand the mathematical steps involved in computing the output, so that it can be simulated by a human. For inherently opaque models, some additional techniques need to be used to improve explainability. These results of these techniques can be evaluated using the following criteria:

Explainability in the case of unsupervised algorithms

Though explainable ML has become a very hot research topic, the majority of the work has been focused on supervised machine learning methods. However, often due to a lack of labeled data, or due to the nature of the problem itself, unsupervised approaches are required.

There is a further challenge: in the current literature, very little work has been done on explainable unsupervised ML algorithms. Explaining the results of unsupervised models is mostly limited to visual explanations. For example, pyLDAvis for topic modeling, and dimensionality reduction plus scatter plot for clustering problems. Some interesting ongoing work on improving explainability of unsupervised learning are:

If explainability is necessary for the application, as is the case with applications that could possibly negatively affect a large number of people, it is best to stick to models that are inherently transparent. But if these models are unusable due to very low accuracy, or if acceptable accuracy can be achieved only by increasing the complexity (to a level where it is not transparent anymore), then opaque models can be considered, along with some of the above techniques to improve explainability.

Explainability in the case of ensemble models — a sample scenario

In this section, we’ll look at an example scenario in which a data scientist (Neha), who was working with the NGO Women at the Table, used explainability in their machine learning research project. Neha wanted to explore the content of speeches made in United Nations conferences to understand what topics were covered and by whom. To do this, Neha converted speech audio to text, and then performed topic modeling on the text data. Once this was done she then used the most relevant words of each topic to map/classify the topic to one of the k user-given themes.

As you might be able to see, there are two critical steps in the model’s decision-making process: first a topic modeling step and then a classification of the topic to one of the themes. Since the “decision” of the model wasn’t going to have any large-scale negative impact, Neha decided to give priority to model performance. Based on a combination of manual verification of performance, and quantitative measures like coherence score, Neha decided to use Linear Discriminant Analysis (LDA) for topic modeling, and a simple cosine similarity between word embeddings for classification. The word embeddings were then generated using a pre-trained natural language processing model like BERT.

Even though this is a very simple task, it’s nevertheless unclear how the final output — the proportion of speaking time in each topic — is generated. This makes it difficult to evaluate the model and gather feedback from the audience. For example, in some instances, conference organizers might expect to see ‘gender equality’ to show up as a topic — they will know that many speakers will have covered it because it is an agenda item. Despite this, gender isn’t a topic in the final graph. It’s only by making each step of the process visible that it becomes possible to appreciate why this might be the case. 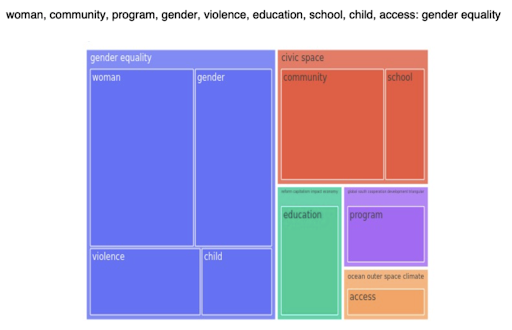 Since the audience isn’t technical and there are multiple steps involved — including unsupervised modeling — Neha uses visual explanations to break down the process and show intermediate results. She uses pyLDAvis (a Python library that helps you create interactive visualizations for clusters that are created through LDA) for topic modeling and tree maps (which are useful for visualizing data trees, or hierarchical data) to illustrate how topic words are mapped to user-given conference themes.

Cheatsheet (of methods/tools to improve transparency of ml tasks)

As we’ve discussed elsewhere, the techniques needed for explainability — and the effort needed to implement it — vary by the type of algorithm you are using.

Below you’ll find a cheat sheet that provides an overview of what is needed depending on the algorithm being used.

Explainability is a very important aspect of machine learning, especially in scenarios where the decisions made by the model affect many people in a possibly negative way. In such situations, it is best to use inherently transparent models if they provide acceptable performance. If they perform too poorly, or if they must become increasingly complex (due to increasing number of features etc) to achieve performance, other models can be considered, but always making sure to maintain the explainability by using one or more methods described above.

Finally, we should remember that even with good tools and techniques to help explain a model, communicating these explanations to an audience is an open challenge. The best way to do this will vary based on the expertise of the audience, and the kind of actions expected from them.

Ethical tech
If we want to use algorithms responsibly, we need to prioritize explainability
Learn more

Learn more about responsible tech with our Responsible Tech Playbook