Connecting IoT devices to the cloud

There are four best practices to connect different types of devices to the cloud:

First, we should introduce the IoT Device SDK. 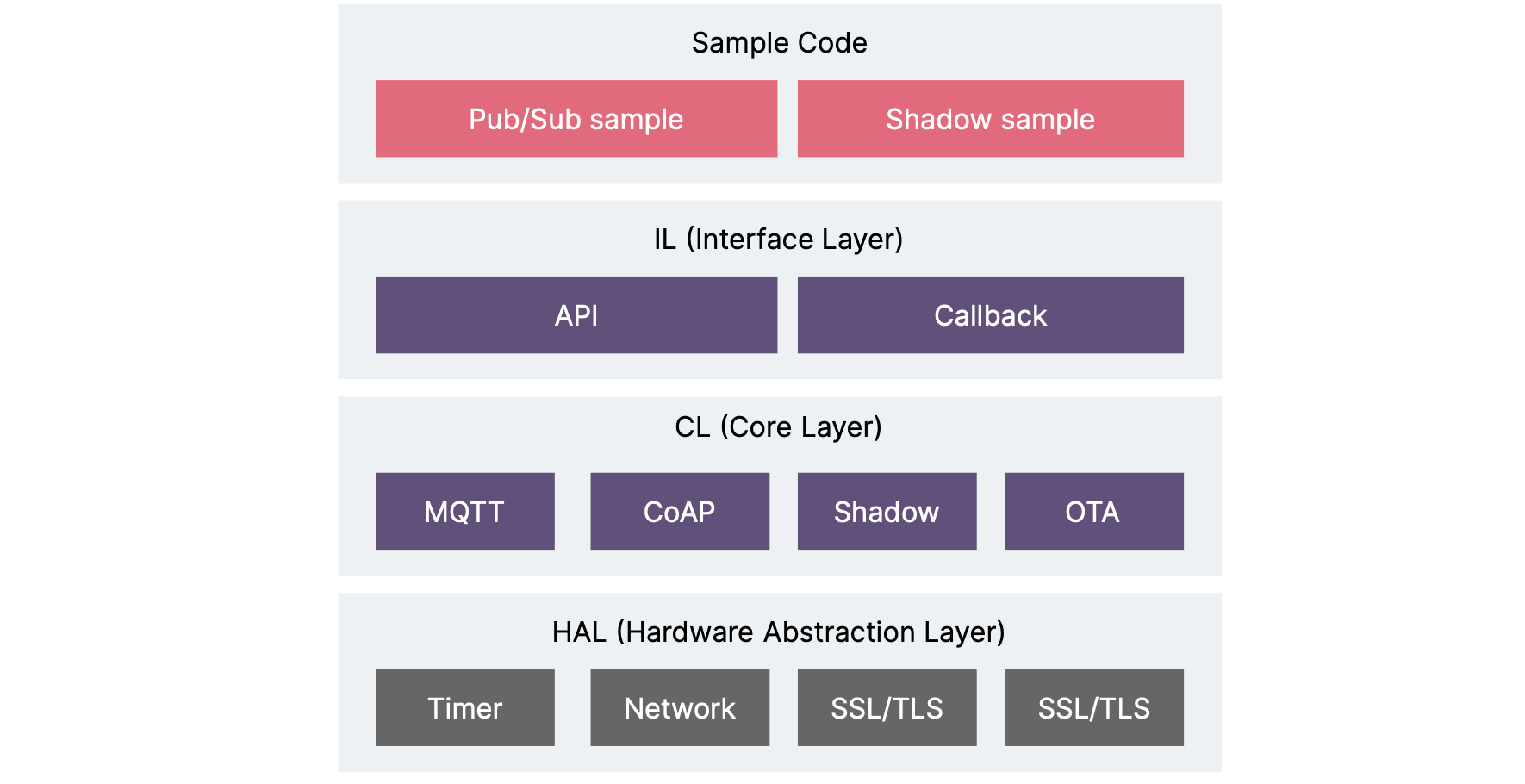 There are 4 layers of the IoT SDK. From bottom to top:

When developing applications on a device, we can always choose higher-level SDKs such as Android IoT SDK on an Android device. That’s because the hardware environment porting work has already been done by the SDK itself.

However, when developing applications for an MCU (Micro Controller Unit) which has Linux or RTOS (Real Time Operating System), we should choose Embedded C SDK and port the code to a specific hardware environment.

With the knowledge of IoT SDK, we can discuss how to connect an IoT device to the cloud.

With the development of high-performance hardware, many smart devices have complete OS such as Linux, Android etc. These devices also have a Wi-Fi or cellular network.

At the operating system level, network communication problems have already been resolved. We only need to develop applications which integrate the IoT SDK of the cloud platform and the communication link with the cloud will have been established.

Rely on a communication module for resource-constrained devices

In the IoT scenario, a large number of devices are resource-constrained, with RTOS, or even without an operating system, using MCU + communication modules to establish their link to the cloud.

There are many suppliers of cellular modules (NB-IoT/2G/3G/4G) on the market. The AT commands of each company are different, which makes developing device-side applications very difficult.

When we need to connect MCU to an IoT Platform, we should always carefully select the cellular modules and check whether they are suitable for a specific IoT platform.

Difference between DTU and industrial gateway:

DTU is a wireless terminal device used to convert serial data into IP data or IP data into serial data and transmit it through a wireless communication network. It has fast and flexible networking, a short construction period and low cost.

The industrial gateway has the functions of collecting data from field devices through serial port or network port. Data collection, protocol analysis, data standardization and uploading to the IoT platform through edge computing functions. Which is more flexible, powerful and customizable than DTU, but it is more expensive and needs more resources to maintain.

Examples of sensors / devices which can be connected to DTU or industrial gateway include sensors, industrial equipment PLCs (Programmable Logic Controller), Bluetooth bracelets

Use a cloud gateway for private-protocol devices with network capabilities

Devices that directly connect to the cloud gateway

For some devices, they already have the ability to connect to the internet, but the protocols vary according to device manufacturers. We don’t want the IoT platform layer to handle the parsing of these protocols directly;an intermediate layer should satisfy the protocol conversion work to make the data meet the unified format of the IoT platform.

This intermediate layer is the cloud gateway. The cloud gateway is at the front of the platform. It receives data from the device side, completes message parsing, and then sends a message to the IoT platform with IoT device SDK.

Examples of devices that connect to the internet through private protocol include vehicle GPS.

Devices that connect to the cloud gateway indirectly

Some device vendors already provide a mature system which manages the devices and provides API. In this case, we can have another form of cloud gateway: Cloud to cloud connection. ​​Making full use of the existing system will make the overall system more stable and give clear rights and responsibilities.

Using a mature system will bring us higher development efficiency, but it’ll also introduce another midware, which will increase communication time.

Examples of devices with mature systems include cameras/NVR systems.

When we need to connect a device to the cloud, we should consider system maintainability, communication efficiency, development difficulty and budget. Think carefully about the most appropriate path for your project.