I still remember the first time I was stalked by a velocityraptor. The team stood in a semicircle around the wall and we repeated our oaths: what we did today, tomorrow and were we blocked. Once again like every day this week I had something to say, I was blocked. One of the challenges I faced was dealing with integration testing. It was difficult to get the other team organised, involved or even interested.

I felt the pressure to score points. It had been slowly building and with the iteration having only a few days left to go. My eight-point card –it was an eight because we knew integration would be time consuming– had been on the wall or almost 2 weeks now and didn’t look like moving. The velocityraptor –our development lead doubling as the iteration manager– could smell meat and made the call that we should track the integration effort as a separate card. The new card was worth zero points: no points scored when completed. I was new to Agile at this point, but I wasn’t new to gaming –I had been a game developer before. The eight points were scored. The velocityraptor had fed. It would be two months before the zero-point card made it to the done column and it required a lot more than zero-effort to complete.

The velocityraptor is a cunning beast. It’s built lean and agile, and its forever sprinting. It isn’t very strong so it uses wile to catch unwary prey. It hunts in packs to take down stronger, more alert foes. The velocityraptor has an unusual feeding cycle. Akin to a snake it only feeds every one to three weeks –some have been known to go four weeks without feeding. It food is points and devours them in a feast every cycle. The velocity is an indiscriminate predator – it doesn’t care where those points come from.

Velocity is a measure –in points– of what has been done. Not what is being done or will be done. After a few iterations of measuring velocity you can calculate the standard deviation and variance. If the variance is low then your team is probably good at relative sizing, if the variance is high then your relative sizing was probably off. All of that is academic though, as the time it’ll take to complete a story doesn’t change regardless of it’s estimate, and you can’t use velocity to measure when the project will be complete. The completion date isn’t total backlog estimate divided by velocity equals iterations to success. This doesn’t factor in replaying the same story until right. The act of iterating on your design. The velocityraptor doesn’t care for all this. It knows that it’s prey to larger predators on the corporate steppes. Without regular feeding the velocityraptor will weaken and can be brought down.

It would be another six months before I saw my next one. An interim project manager started to ask the when testing would be done. It’s an innocuous question and not a helpful one so I deflected the question and I started to observe. The question would come back every few days with increasing frequency as we neared the end of the iteration. The question would only ever be directed at the testers. “When will be testing be done?”, “Can we finish this testing by the end of the iteration?”. There was no “when will dev be finished?” question being asked.

Knowing what I was dealing with, I took our young velocityraptor aside. He had misjudged his prey, I was more experienced now and he needed to have formed a pack. I was relieved, I was able to protect the team.

Unsure if you’re being stalked by a velocityraptor? Look for these behaviours:

Everyone deserves a safe workplace, put up the no velocityraptors sign, band together, be alert but not alarmed. Stay strong. 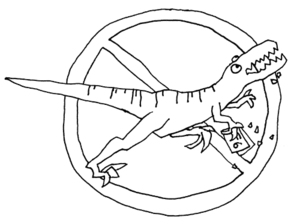